Secondhand Wisdom is a continuing series where I share unique insights from my conversations with a hammock industry veteran.

I am one of those unfortunate people whose yard lacks the required pair of trees necessary to hang a hammock the “traditional” way.

I use a metal stand instead, something closely resembling the one above.

Above all, a quality metal hammock stand should do two things:

Now, we’d like the stand to be light, so we can move it around the yard. It would be nice if its poles were fairly narrow and aesthetically pleasing.

But above all, it needs to be safe.

Some manufacturers have allowed these secondary concerns to take precedence over numbers 1 & 2. That’s a problem. Just ask the Algoma Net Co:

“Hammock Stands Recalled by The Algoma Net Co. Due to Fall Hazard

WASHINGTON, D.C. – The U.S. Consumer Product Safety Commission, in cooperation with the firm named below, today announced a voluntary recall of the following consumer product. Consumers should stop using recalled products immediately unless otherwise instructed. It is illegal to resell or attempt to resell a recalled consumer product.

Hazard: The foot brackets on the hammock frame can crack or tear, causing a consumer to fall to the ground.

Algoma tried to cut corners in pursuit of a cheaper, lighter stand, and they paid the price. There have been several additional recalled stands since this one, which occurred in 2007. You can read more about it here.

I don’t intend to bash Algoma in this post, because they’ve since improved their products and have been recall-free going on six years. Algoma certainly isn’t the first or last manufacturer to produce stands that have hurt their customers.

Another wooden stand, sold by popular online retailer Hayneedle, was recalled in July 2012.

It’s pretty concerning that some manufacturers are avoiding fail-safe measures to ensure that this NEVER happens with any of their stands, considering that if one of these collapses while you’re laying in it, you could suffer serious injury or death.

And fail-safe measures for stand safety assurance DO exist in the form of Eddy-Current testing, a high tech step in production that a surprising number of manufacturers do without. It’s the same testing method used to ensure the structural integrity of airplane parts. You can get the full rundown on what Eddy-current testing involves on Wikipedia, but I’ll give you a basic rundown here:

Because of its obscurity, stand manufacturers often don’t emphasize to the customer that they perform Eddy-Current tests. But they should. It’s allowing the corner-cutting manufacturers to get away with selling stands that could very well be death traps. In fact, I could only find one online retailer that even mentions that they sell Eddy-current tested metal stands. I would hope that other online seller soon follow their example and abstain from selling untested brands.

Hammock stand retailers will usually at least mention the gauge of steel that they use, and this is probably the closest barometer of structural integrity the consumer has readily available. Pawley’s Island Hammock Stands are generally known as the thickest in the business (for steel-newbies: the lower the gauge, the thicker the steel). 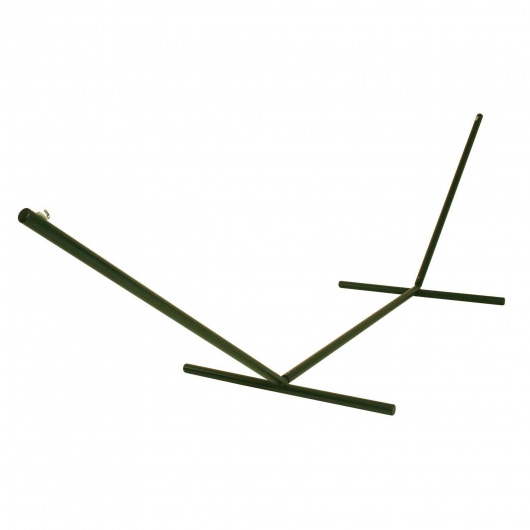 HONORABLE MENTION,: “100-percent tubular steel supports your hammock.” — From an online stand retailer’s stand product page, not to be named. Seriously, how do companies with product specs like that ever sell anything? Another recall in the making.

Happy (and hopefully, safe) hammocking to you and yours.

Show us Your #DFOhome